We can attest that you could not find a better place to swim than Kas, Turkey. The water is not only warm, but it’s also soft and crystal clear. Below us, we can look down 30 feet and see the bottom.

Where we berthed Golden Glow, there also is an under-sea spring that feeds into the Mediterranean, considerably lowering growth of grass on the bottom of the boat.

What we didn’t know until reading this excellent article by Patrick Scott in the New York Times, you can actually sign up for a swimming vacation in Kas.

Here’s an excerpt from the article, which you can read in its entirety at: http://www.nytimes.com/2016/02/14/travel/turkey-kas-swimming.html?_r=0

“Honestly, I didn’t think our Mediterranean vacation could get much better.

The dozen of us on the trip had already swum several miles a day through astonishing turquoise waters off Kas, a remote village on Turkey’s southwest coast, where cliffs soar up from the sea, the soft air is scented with jasmine and views of the glimmering bay are downright therapeutic.

Amid a ring of seven islands earlier in the week, our group of open-water swimmers glided alongside limestone coastlines, the sunlight spangling the underwater landscape of smooth boulders and serrated pillars. We swam over marine forests swaying in the current. We crossed into the open sea, pulling rhythmically through a panorama of royal blue, a laser show of sunbeams funneling into a gleaming ring in the depth.

“It’s like swimming in the sky,” my reluctant-swimmer wife, Susan, would say later in our breezy hotel room. 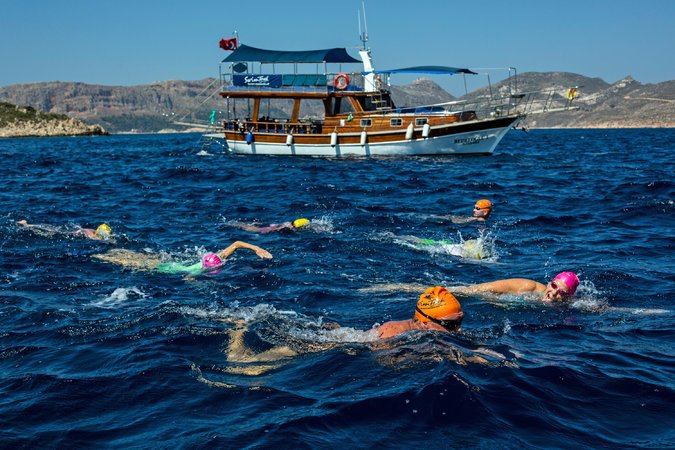 Susan; our daughters, Jenna and Michaela; and I were on a weeklong adventure — a swim vacation. It is a puzzling thing to many but is slowly gaining popularity among water lovers. The tours are a tiny sliver of one of the fastest-growing segments of tourism, so-called adventure travel, which typically involves some sort of physical activity, connection with nature and cultural immersion. Think of trekking through gorilla habitats in Rwanda or kayaking down the River Kwai in Thailand — the antithesis of a package tour to Las Vegas.

Our seven-day July trip had it all.

We swam about 1.5 miles each morning and afternoon, in translucent waters under mighty peaks. We savored local dishes like the squid our hosts caught in the sea and grilled on the boat. We stroked over ancient ruins by day and danced with young Turks by night. 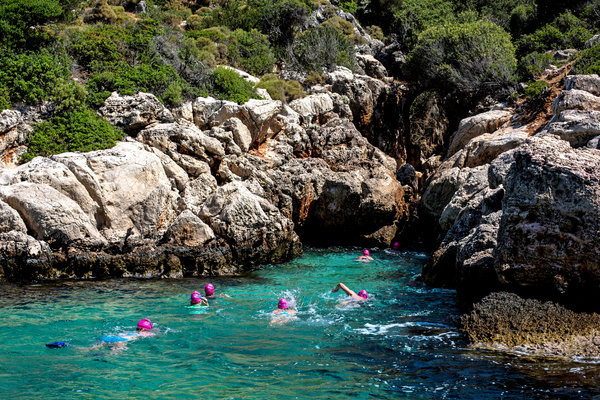 Swimming off Kas, which offers a dramatic setting of mountains and Mediterranean.Credit Daniel Rodrigues for The New York Times

The dozen of us who signed up — ages 17 to 65, some occasional swimmers, others training for big races — made our own way to Turkey. SwimTrek, the British company running the tour, took care of the rest: the lifeguard guides, the family-run hotel, the local tour boat, the spectacular routes.

Now, we were on the final leg of our longest single swim, a 5K international crossing from a large rock near the Greek island of Meis to the Kas peninsula, our guide Bruce Allender leading the way in a dinghy. I cruised through the pack looking for our daughters and saw them swimming side by side at the front.

Ever since they were young, I had been trying to get these two to love swimming as much as I do. Both had reluctantly agreed to swim on their high school teams, but had no interest in chlorinated laps as young adults, now in their mid-20s. They didn’t like swimming in lakes or at the beach, either, with little tolerance for critters, waves or cool, dark water.

I steered in between them, smiling in the clear, blue-green sea. We were arcing our cupped hands into the water in unison, catching views of one another with each breath. It was bliss.

And it was followed by another magical moment, when I swam the next day in sync with a large sea turtle that surely was inviting me to hitch a ride.

Our family agreed that it was our best holiday ever. 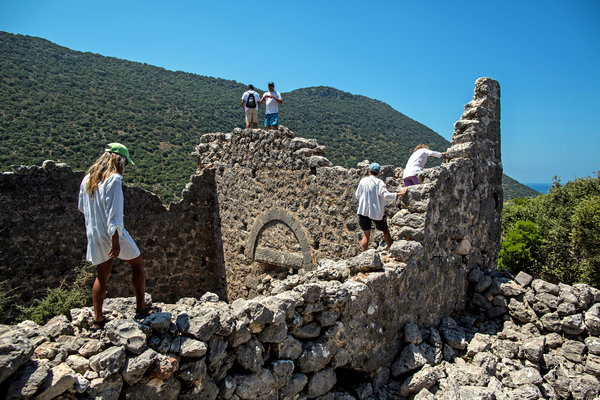 Climbing up a steep, rock-rutted trail, we stopped to inspect large stone tombs with curved lids and posed for group pictures against ancient crumbling walls. From the highest point on the hill, the shallow bay was a kaleidoscope of aquamarine and electric blue, the boat like a little toy in the water below.

On the last full day of swimming, I was exploring an azure bay after lunch when I came across a dark circle, maybe 25 feet below. I took a deep breath and scooped down through the water, every six feet or so pinching my nose and blowing out to pop my ears — a tip I got from Mike, the retired scientist.

A geometric pattern of a shell sharpened as I descended to the floor, and I fanned my fingers across its ridges. The turtle rose up slowly as I rushed to the surface for air. When I came back under it was floating as if in slow motion, flapping prehistoric-looking fins, banking to the left. I glided above, mimicking its underwater flight, as sunlight flickered across its shield.

We swam for eight minutes, me several feet above, plunging down to rub its shell. The turtle kept close. It was almost as if it were welcoming me to latch on. So I did. For three rides, several seconds each, swooping through an ocean of velvety blue. 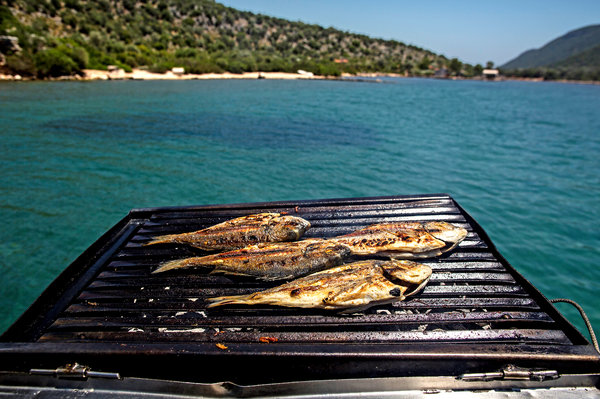 The local catch for lunch. Credit Daniel Rodrigues for The New York Times